Anyone that doubts that words have power should listen to election speeches. Consider how “burning the flag” and “gun control, or “pro-life” and “pro-choice” elicits strong imagery and reactions. Yet people use words, key trigger words, without any thought of their real and complete content. The biggest abuse comes in the form of obscenity, which used to be in the realm of the shock treatment and poorly educated. My parents used to say those that curse too much are simply too stupid or uneducated to express themselves clearly. I now amend that to say “or the person is going to an extreme for the emphasis.” After all, “the damn dog” implies more ire than simply “the dog.” 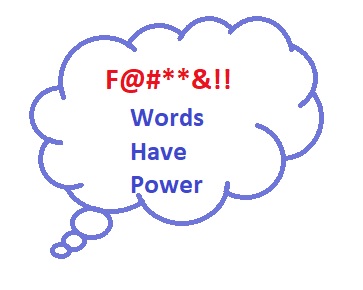 Unfortunately, some words, mostly curses, have become so mainstream and abused that they fail to really shock anymore. They create emphasis and have some offensiveness but the true value of those words is diluted down from over and inappropriate use.

An example of this shows up in Star Trek: Discovery’s the “Choose Your Pain” episode when Tilly, Burnham, and Stamets are discussing the organic drive. Tilly pops off “Oh, that’s so f*cking cool!” and Stamets agrees with the same profanity.

Really, Trek writer guys? By the twenty-fourth century (or whatever), we can’t express ourselves any clearer than that? We can’t move on beyond the use of expletive words as we evolve enough to course through space? After all this is a ship of scientists, military people, and explorers. Some of humanity’s finest.

Did this add anything to Tilly’s character? We already know that she is socially awkward and easily excitable but “That’s so cool!” would have been just as strong and a lot less offensive.  The language jarred me and tainted the whole episode as poor writing.

Do you know what the f-bomb actually means? It is from old English, an abbreviation for a saying that appeared on a type of wedding license stating the couple has permission to “fornicate under the consent of the King.” Think about this definition the next time you use it to describe something like coffee, a video game, or a shout of anger. It doesn’t make sense as “it was a fornicating under the consent of King good video game!” Or “Fornicate under the consent of King you!” It doesn’t even make sense when you focus on the modern definition of ” to have sexual intercourse with”. You can’t do that to the video game or the coffee (as in “this is sexual intercourse good coffee!”). Well you could, I suppose, but it would burn a lot.

Now you may be saying, “Come on, Carla. Everyone cusses.” That’s true. I’ve dropped a number of inappropriate f-bombs in my talking and writing and probably will do so again. But it’s still sloppy speech that demeans me as an intelligent person. In my writing, I use it specifically to show the character is 1) furious, 2) uneducated and base, or 3) out of control. Curse words have a power and a cloud of emotional intent that I try to wield like a fine sword. After all, if a smart character drops a rare “well, shit!” comment, then you know they are either in a great deal of trouble or extremely mad. The well-placed curse can convey a lot of emotional tension when used with finesse. When I find the use of expletives too often in books or movies without any nuances or good reason, the cussing becomes just poor writing.

I woke up thinking about pasts and futures through a hangover-fuzzed brain. Not surprising really since New Year’s Day everyone acknowledges the world turns a little older and we only bob along on the ever-flowing waves of time and fate. Where we strike out swimming is completely up to us. Our resolutions act as our navigation. For me, the self promises are pretty simple.

Let go of mental toxicity in all its forms.

These concepts slip out of the mouth easily but prove harder to enact. The first resolution weighs particularly heavy as 2017 begins. It’s now my sole job. Am I up for it?

Although every year sees the passing of wonderfully talented people in all professions, 2016 seemed particularly bad for the entertainment industry. Yet I think it is a matter of perspective. After all, the beautiful people who passed away are the ones I grew up with, not some long-retired star of my parents’ generation. These are the comic faces on my TV, the music I rocked to, and the larger than life stories in dark theaters.

Some of the folks were near my age when they passed. Thus it seems like that old wanderer, Time is whispering, “What impacts have you made? Have you made your mark? If not, then get your ass in gear because the few years ahead are all you have.”

I hear you, Old Man Time. Today looks like a good day to write.