I caught the latest film in the Marvel Cinematic Universe, Captain Marvel, this weekend. It runs along the same quality as most of the origin stories: not terrible but not as great as Thor or Iron-man. What disappointed me most in the flick was that Brie Larson, who played Carol Danvers, failed to live up the feminist film hero. Since this movie was one of very few female superhero-based ideas, the story should have equated her with Wonder Woman in terms of icon status. It did not. 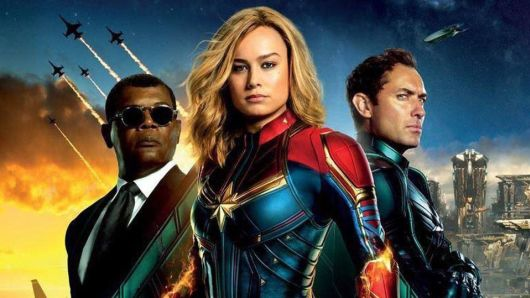 The movie starts on a distant planet where the Kree rule. Carol Danvers, simply known as Vers at this time, wakes from an Earth-related dream and deals with it by training with her Kree mentor (Jude Law). He teaches her to fight and control (i.e. suppress) her abilities. Her power comes from energy jets that blast from her fists, but she is also mastering martial arts so she can fight without using her special ability. As the movie progresses, we learn that Vers, who considers herself an amnesiac Kree, is really an Earthling survivor of an incredible energy explosion. Hence the origin of her power.

The story was engaging. We saw the amnesiac go through the emotional discovery of her past as the real Carol Danvers emerges. Several wicked plot twists have her questioning everything she knew. In the end, she learns her closest companions have lied to her for six years. She alone must learn the truth of who is the enemy and the victims. One of the best feminist scenes in the film was when her male enemy is yelling “come on! Let’s fight! No powers!” (not a direct quote). She pops a power blast into him that sends him spiraling across a field and into a rock. When she stands over him, she states, “I don’t have to prove anything to you.” Something most women should say to men who challenge their worth.

Part of the disconnect for me was in the setting. I thought I was going to see an Earth-hero movie. When the movie started and stayed for a while in the Guardians of the Galaxy setting, I then had expected some of the lighthearted banter that Guardians had perfected. Not in this film. The audience saw familiar faces and strong enough references to know this was set before the first Guardians film. Even though the director added some of the same pop-music feel, it didn’t come off successfully. This movie was simply a dark view of the galaxy.

In addition, Brie Larson never took Vers’ or Captain Marvel’s emotions out of grim fuming mode. We saw fuming-but-unsure and fuming-but-confident but very little else. For example, when she was at the crisis point of the plot, fighting for her life, we saw no strain or focused emotional depth to show us that she was maturing from doubtful soldier to rebel powerhouse. I suspect this is a director’s decision and not the actress’s doing, yet it made the character less likeable. Although her best friend states that Carol Danvers is “funny”, the director never proved it to us. This is unfortunate since the plot had plenty of opportunities for small comic highlights for her.

In addition, she didn’t come off as heroesque and certainly not as a “defender of the Earth.” What I mean is that Larson doesn’t have the physical look that audiences (or at least that I) have come to associate with comic book movies. After all, Captain America, Wolverine (yes, I know he isn’t part of the MCU), Thor, Iron-Man in his suit, Superman, and even Wonder Woman all come off as visually larger than life. Even Black Widow, though average size, carries an aura of more-than-everyday-hero attitude. These heroic proportions are at the very heart of comic book art. True, Spider-Man and the Flash aren’t necessarily tall and brawny, but their characters and powers  dictate they be young and wiry, rather than beefy. Larson is shorter than many people in the movie and even in costume doesn’t look all that heroic without her glow.

Captain Marvel is also a thin origin tale for Nick Fury, played by Samuel Jackson with a computer-enhanced young-looking face. We learn about his early days in S.H.I.E.L.D. and where the idea of the Avengers Initiative comes from. Jackson’s ability to deliver great lines and infuse humor is one of the best aspects of this movie. The one problem with young Nick Fury is that, although he looks in his early thirties, the body’s use in action scenes still screams a 71-year-old man. I love Sammy, but his ability to move swiftly and deal with fighting looked off.

Ladies, check it out.

Despite the negative review, I suggest fans of the Avenger comic movies go see Captain Marvel for completeness. She will figure prominently in Avengers: Endgame as indicated by the sneak preview at the end of the Captain Marvel movie. In fact, that is the only reason I think this movie was made. The resolution of the Thanos problem should not look like a cheap magician’s hat trick. Plus, I want ladies to see it to encourage more use of women in top hero roles. The days of the damsel in distress are over. They flocked to Wonder Woman for that reason. Captain Marvel, even flawed, should inspire the same rallying cry.

One final note. The producers or director had fun putting in light references to other great movies. Just for fun, see how many other films and comic books shout-outs you can catch. The producers created a wonderful homage to Stan Lee in the opening credits, and they dropped in some other nods to great movies as well. Here are some hints: References to previous versions of the captain, Men in Black, Independence Day, and Top Gun.

Mortal Engines is the newest post-apocalyptic film offering, and like so many others, it fails to hold together. The movie looks engaging with its steampunk-ish giant rolling cities and fantastic airships, and the artistry is something to behold. However, the plot sinks with holes and confusing logic leaps. The one entertaining aspect of this movie is counting the number ideas it stole from other films, including the Matrix and Star Wars. 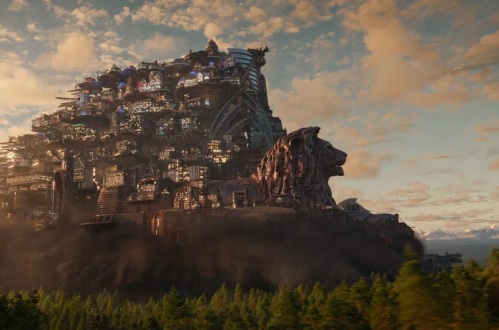 Based on an idea of “municipal Darwinism”, a great phrase that could  be applied today as larger cities incorporate the smaller ones around them.  In Mortal Engines, the great city machines chase down and engulf smaller ones for food and fuel, the London machine has grown to be the greatest city roaming the land. The model used for it is impressive with a locomotive front, and rising levels of towers that ends in a cathedral top and necessitates the need for an internal subway system to get to the engine levels.

The enemies are the people who live beyond the “great wall,” which looks like a giant dam guarded by an array of flying craft. The anti-tractionists chose to settle in one place, build homes, farm and, by the Mayor of London’s thinking, hoard all their supplies. These Luddite-style people are a peace-loving mixed culture that includes Asians and Indians, making this a type of racist war as well. The plot centers around the idea that as long as the wall is standing, the great machines and scavenger societies can destroy their side of the world while leaving the rest alone.

But of course, tell a power-crazed man he can’t go to some place and he will steal, murder, and sacrifice all to go there.

That is exactly what Hugo Weaving’s character, Thaddeus Valentine, does. Weaving plays the villain in the wonderfully menacing way he perfected. He murders a woman to get an ancient WMD to blow down the damn Wall. In killing people, he sets up a practically Shakespearean plot twist where the daughter (Hester Shaw) of the slain woman grows up seeking revenge. The movie starts at Shaw’s attempt at revenge, and much of the story is told in backflashes.

The story problems begin with the initial world. London, which boasts a large population, is in constant need of food, supplies, and energy. Except the audience sees multiple views of lovingly tended flower gardens. A ridiculous idea for a community on the edge of starvation. Food, if it could be called that, is shown multiple times, but only in the sense of sludge and algae. Edible animals must have disappeared completely. Yet this world isn’t the barren wasteland of Mad Max fame. The great engines roll through some wasteland, but the film shows great forests as well so the Earth is obviously capable of sustaining farms.

In addition, when London “eats” a town, the people are subsumed into the population, but the material goods are not stripped out, the food is not confiscated, valuables like cloth and furniture are not recovered. The town is put through a gigantic grinder to reduce it to burnable fuel. In short, the premise of this world doesn’t hold up.

Finally, the most glaring plot hole is the fact that as London approaches the great Wall, the anti-tractionists on the other side know Valentine has the WMD. This miracle knowledge appears out of thin air since the weapon is a secret to most Londoners, including Valentine’s own daughter. How would the Wall dwellers have known about it? In addition, as the only other witness to the finding of the WMD (and the murder of Shaw’s mother), Hester doesn’t even know or understand the importance of the weapon until near the end of the movie. Nor does she know about Valentine’s plan for it. She has the only key to stop it and, at the climax of the movie, seems to know exactly where to place the key in order to shut the whole thing down.

In short, the movie offers beautiful CGI and steampunk atmosphere but dies on plot, making this movie not worth seeing. It’s a shame really because such graphic art deserves a wonderful story to cement its fame. Peter Jackson has certainly done better. Yet Mortal Engine’s future lays in being shown in some Mystery Science Theater 3000 venue where shouts of disbelief and popcorn throwing are allowed.