When he entered the remote compound, James Mitchell knew his family would live and work at the top secret Bio-Lab 4 military base for the rest of his career. Twenty-three years later, the biological weapons lab has become a political embarrassment and the Army is shutting it do 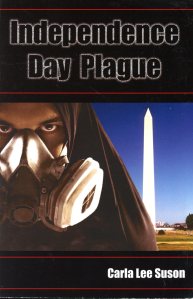 wn. At the farewell celebration, Colonel Forrester decides the only way to keep the secrets safe is to kill everyone with one of their own homemade viruses. As the only survivor, Mitchell watches as his family and friends die writhing in agony. Now with his sanity to the breaking point, he wants revenge on the government that murdered his family and stole his life.

On July 4th, 2026, three million people flood into Washington DC for America’s 250th birthday celebration. Veteran cop, Michael Dorado heads the city’s anti-terrorism task force for the biggest party of the decade. On that morning, Mitchell send Dorado the message, “When the crowds are at their peak, I will detonate a biological weapon that will spray the nearby people with a deadly pathogen.” Now Dorado is in a battle against time to stop a madman before he unleashes a lethal virus on the world.

Independence Day Plague is available in paperback and ebook form from Barnes and Noble and Amazon. Signed copies are available by contacting the the author.

“The Justice Blues” in Gods of Justice 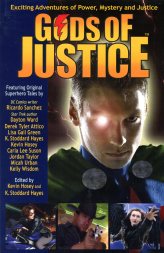 Like mythical gods of the past, superheroes are the primal force of nature. This thrilling collection of ten original stories features brand new heroes in action-packed adventures that will grip you and never let you go. Other writers include Ricardo Sanchez, Dayton Ward, Derek Tyler Attico, Lisa Gail Green, K. Stoddard Hayes, Kevin Hosey, Jordan Taylor, Micah Urban, and Kelly Wisdom. The anthology is available at Amazon and Barnes and Noble.

This 2014 collection of original short stories and poetry, including the computer-based cautionary tale “Legal and Binding Agreement.” It is available at Amazon.

“Dancing Across the Veil” in Holiday Tales Anthology

Holiday Tales features poems, memoirs, and short stories devoted to a range of special days, including Arbor Day, the 4th of July, Halloween, and of course, Christmas and Thanksgiving. It is excellent for all year enjoyment. It is available at Amazon and Barnes and Noble.com.