Last night I mused a bit on President Trump’s desire to have a military parade and envisioned the weapons, tanks, and troops going by as he watched from some kind of extreme bandstand. The idea is ludicrous because of its huge expense when money is sorely needed just about everywhere else in the government. In addition, we are not a dictatorship-run nation that needs the ego boost of military might filling our streets. Trump may need it to compensate for some lack of ability or popularity, but America has always been better than that. We celebrate our diversity, our freedoms, and our successes, not our ability to destroy or the whims of our president.

However, my musing turned down a strange path. Wouldn’t it be grand (and cheaper) to organize a “military parade” filled with cosplayers? Think of it. For three days, the citizens of the Nerdarchy could gather in Washington DC, sponsoring quests all over the mall and mock laser battles around the Smithsonian buildings. Then on the third day, a mighty parade of young and old march past the Capitol, near the side of the Smithsonian Museums and the Archives, and towards Pennsylvania Avenue and the White House. The President can even come out on his balcony to wave as we pass by.

Picture it. On May the 4th, the 501st Legion in battle armor white marching first followed by Jedi young and old. The Leah ladies at various ages and costumes stroll behind, perhaps with some of the Boba Fett clones accompanying them. All walking battle machines are welcome. Next, bat’leth-carrying Klingons snarl at the crowds in honor and 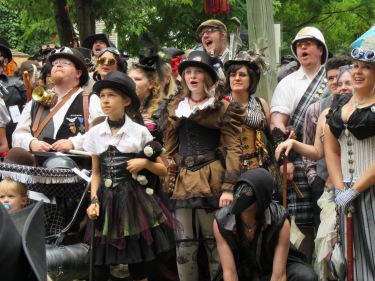 disdain as the Star Trek oriented fans stride by, touting phasers on their red, gold, or blue uniforms, spanning all the ages of the Trek universe. Some may even include with Orion slave girls on their arms. Cylons and Battlestar Galacticans are welcome too. After that, valkyries, superheroes (with or without their decorated cars), and steampunkers with parasols, swords, and steam-powered laser rifles walk by next to Renaissance nobility and gentry, the cyberpunks, and various video game warriors, Manga marvels, and mech-masters. Basically, if you are in cosplay, you would be welcome in the parade.

And above it all, Tie fighters and X-wings buzz overhead in the missing man formation… Okay, maybe that is a bit too much to expect, but you get the idea. Cosplay is rising in popularity as more fans come together to form groups around central themes. An amazing amount of artistry goes into these costumes, so why not flaunt them? Cosplayers all over the country can come out in unison to show the world that active imaginations, creative intelligences, and a sense of unity are alive and well in some pretty damn cool folks.

That parade would be awesome! Should we go for it? 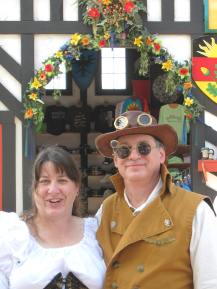 Sometimes the fun is in just showing up!