The original Blade Runner made audiences question what is human, what gives us the right to be masters, and that everyone, even artificial people, want to live beyond their years. Of course, on the surface, it was a thriller pitting “evil” replicants against a burned-out cop trying to do his job. But the story of Rachel and her love for Deckard made viewers question how human the replicants really were. 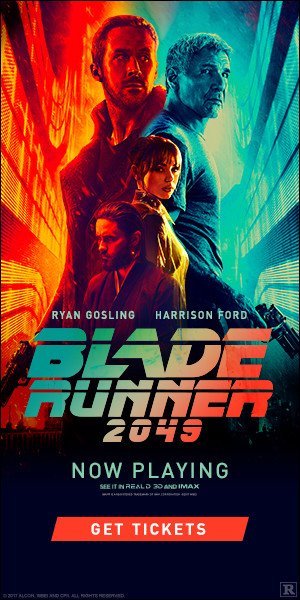 Blade Runner 2049 takes those ideas to a new level. The world is more dystopian than the original movie, which was already dark. The writers provided some explanation by invoking a history of a great ten-day blackout that changed everything. The gap between the impoverished and the wealthy was is wider than before as the plot hints that the new replicants on Earth have taken over most of the jobs. The artificial ones are clearly hated by people, who heap racist abuse on the replicants at every chance.

The new movie’s plot is not as linear as the original. In BR 2049, a newer version replicant, played by an almost completely unemotional Ryan Gosling, hunts down previous versions who weren’t as controlable. The differences in the replicants is that the newer ones have a programmed sense of obedience. Gosling’s acting is superb in that he continues through most of the film showing only curiosity or the passiveness expected from a replicant. His only outbursts of passionate emotion come at the death of his lover and at a point of supreme revelation of his own past.

The movie begins with K (Gosling) hunting down an illegal replicant outside of the city. After the killing of the older model, he notices some odd factors around the house which leads to the discovery of a body buried with care under a tree. The dead person turns out be a replicant that died in childbirth, which was thought to be impossible. The potential impact of this is enormous and the search for the child begins. The police worry that it will destablize society even more and lead to a replicant uprising, while the Wallace Corporation (replacement to the defunct Tyrell company) wants to use this miracle to “manufacture” replicants faster. For the audience, it brings into question the depth of the replicants’ humanity. If they are human, whether born or grown, then could they stay property? K’s search to answer these questions and others eventually puts himself through some anguished soul searching and leads him to seek out Rick Deckard (Harrison Ford) who now lives a hermit’s life in a bombed-out Las Vegas hotel.

The movie also explores forbidden love. Just like Deckard and Rachel in the first movie, K has a lover but this time in the form of a hologram. The relationship seems a bit perverse at first but the audience eventually realizes that the holo-woman, named Joi (Ana de Armas), is the only relationship available to him and he feels a strong need for  love that equals any born human. In addition, when Deckard is a prisoner of the corporation, Wallace attempts to extract information by providing a new Rachel replicant. Although Deckard feels a stirring reaction to her presence, he knows this replacement is not his Rachel.

Ridley Scott directed the original Blade Runner and used powerful light, shadow, and water to emphasize the declining world. In that movie, the dark and wet streets contrasted against the neon brightness of the ten-story building advertisements and the garish shopping districts. The dark setting and Vangelis’s soundtrack created a moody but not yet dystopian world that felt realistic. Years after I saw this movie, I was walking in the night rain in downtown Tokyo admiring the huge ads and these words came easily to me. “You too can have a new life on the off-world colonies…” The movie felt like our future.

Denis Villeneuve, the director of Blade Runner 2049, kept Scott’s interplay of lights and darkness but magnified it with the symbology of water, which is in nearly every scene. The water itself, or its absence, represents the conflict between old human and new replicant all the way through to the ending fight that takes place on a dam spillway. K battles the evil replicant sent from the Wallace Corporation in a drowning ship for control over information on who the human/replicant baby is. The water could represent the washing away of the old humans or the future tide of change. The imagery throughout the movie is powerful, making it well worth the cost of the big screen.

The only detractor I found was the soundtrack. Vangelis created beautiful somberness in the original flick. Hans Zimmer’s soundtrack is harsh and discordant, sounding to me as more noise than true music. The director may have intended this to give a stronger atmosphere of the harshness of the society. However, in a theater’s loud speaker system, it became painful and undermined the story.

Would I recommend this movie? Yes. In fact, I’m tempted to see it again tomorrow because this movie has layers and deeper meanings that I’m sure I missed the first time. Such an artistic piece with a strong plot is rare in today’s science fiction. The movie is not happy or comfortable and it makes no pretense about it. Like many of the social commentary sci-fi’s of the past, it puts difficult questions of racism, equality, and humanity front and center without any glossing over or offering any solace. It will become a classic, like the original, for those reasons. Definitely consider checking it out.