Early trailers of Valerian and the City of a Thousand Planets started more than six months ago and definitely grabbed my attention. However, the movie, much like Avatar, provided wondrous CGI graphics and failed in creating a good story. Good comic book movies and visually stunning sci-fi flicks abound this year, so it’s a terrible shame that Valerian failed so much. 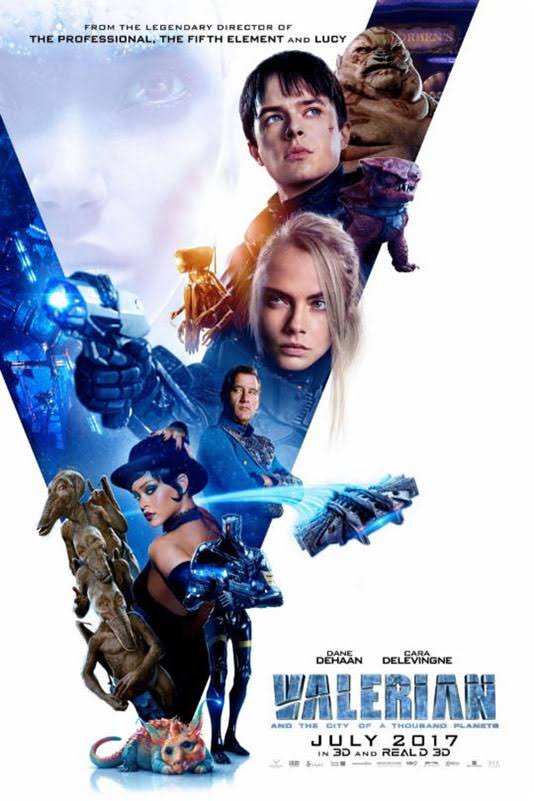 The plot, such as it was, offered imaginative ideas, including connecting this tale to Earth’s history. The City of a Thousand Planets has the International Space Station at its core, building layer after layer upon it as first countries, then later aliens help expand the station, now named Alpha. It was one of the best parts of the movie.

Another creative idea was a tourist trap bazaar reachable only with an interdimensional helmet. The tourists arrive at an empty spot in the desert and see others wandering around aimlessly. Once the visitors put on helmets, they enter another dimension that is not only wall to wall dark buildings but also hundreds of stories high. The concept and visual execution of this was a lot of fun.

In addition, the writers made a creature that poops out multiple copies of whatever it last ate. Think of that in terms of diamonds. While in the helmet dimension, Valerian snatches this rare animal from a black-market trade while his partner, Laureline, watches outside the dimension. The action scene offers some comic action to an otherwise not great film.

The producers delivered on graphics as well, making the film well worth the big screen price. The various alien creatures are not rehashes of other movies. The ships and aliens were similar but original enough to engage the audience and fit the story well. Even Rihanna shows ups as a shape-changing hooker and gives an amusing performance to add levity to the situation.

Many reviewers compared the movie to The Fifth Element  because of the comparable chaotic blitz of imagery that the movies share. Luc Besson is the director of both so it is his artistry that we see. However, Bruce Willis and Milla Jovovich pulled off their romantic roles better. They created a synergy that pulled the audience into the story and made the love connection more believable.

In Valerian, Dane DeHaan and Cara Delevingne lacked chemistry. DeHaan seemed too young for the role of a seasoned military major although his acting was good. Delevingne’s Lauraline spent the whole time radiating barely controlled anger and ballsy determination, giving her no character depth. She wasn’t likeable so we didn’t care about the love story weaving in and mostly out of the story.

The plot also fails in terms of details. Most of the action occurs on a space station, albeit a huge, multi-tiered, multi-atmospheric station. Valerian (like Superman and Iron Man) acted like a human wrecking ball. He failed to use doors most of the time, preferring to blow through walls. Not an issue on Earth but why didn’t anyone worry about atmospheric breaches? In fact, in the run up to the big climax, the hero rams though multiple environments, contaminating each of them without any thought or retribution. In addition, why would a space station have an ocean large enough for dinosaur-sized underwater monsters? Visually exciting but stupid in concept.

Another glaring hole involved the most valuable creature in the galaxy, a “creator” (the diamond pooper), which is the last of its species. Early in the movie, Valerian and Lauraline retrieve it from a black marketer in another dimension. Lauraline, in an effort to keep it safe, then carries it into gunfights, radioactive zones, and an alien banquet hall where humans are a rare delicacy. The cute beastie was lucky to survive.

Overall, I’d give this Valerian, The City of a Thousand Planets a weak three stars, mostly based on its visual impact. I’m glad I saw it on the big screen but won’t shell out the $20+ to buy the Blu-ray. Hopefully like Avatar, this film will fade off into low quality sci-fi obscurity without any sequel.