As a fan of all things morbid yet funny, I’ve been hunting around for the Bring Out Yer Dead game ever since I saw it demonstrated on a vblog. Produced by Aaron Watts and Ginger Ale Games, this board game involves making sure your relatives get the best graveyard sites so that you inherit the most money. The gameplay features a simple bidding system using numbered “death certificates”. Folks improve their odds by switching graves or pulling their “lost” relatives out of the river, which is the destination of the lowest bids. Players can also line their pockets by graverobbing a little treasure, which doesn’t help with game play but adds bonuses when adding up final points 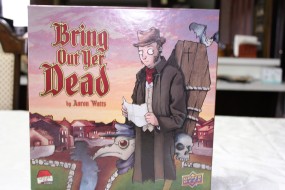 The game works with two to five players, limited by the little bags of coffins and family shields. The board game is colorful with the card artistry attractive being slightly comic without wandering into the gross or too morbid. The style is late 1880s but I would never go so far as to call this steampunk.

Bring Out Yer Dead works well for two players but, like most games, it is more fun with higher numbers. The designers were smart in creating a different board side for larger numbers of players; the main difference being a larger amount of grave spaces. Playing time is about an hour, ending when the first person runs out of dead relatives.

I enjoyed the game enough to buy it after trying it once and have now played it multiple times. It provides a nice combination of competitiveness in terms of victory points and ruthlessness in kicking people out of the high point grave sites. I also think that the game ends too quickly in two-player mode because it provides too few coffin pieces. As play progresses, some of the coffins should wind up in the river, most in the high point graves and a few in the low point mass grave. The game ends so quickly that really no one winds up in the mass graves.

The downer side is that, despite multiple readings (and arguments about meanings) of the rules, I’m not sure I’ve played it correctly yet. The instructions are unclear on the use of the fate and treasure cards. Having a section where the designers gave examples of the game play would have been extremely helpful. 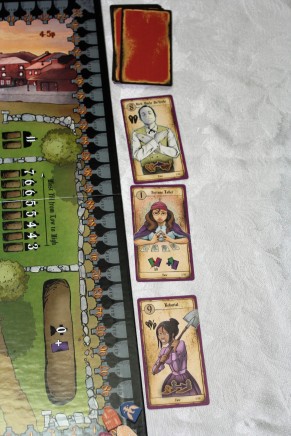 For instance, it took a while to figure out the Vampire card. It allows you to place a coffin in a graveyard but not in a grave. Since points are based on getting the high-end graves, this card appears to do nothing helpful, so why have it? Turns out that its only useful value is as a counter to the Ghoul card that allows you to force another to take one of your coffins into his own stash, thereby slowing his ability to win. When that opposite player puts the coffin into a grave, it doesn’t benefit their score, only yours. They can still throw it into the river but another card allows you to save your river-drenched kin.  By using the Vampire card, the opponent player can then place your family coffin in the grass area of the graveyard, giving you no points and no way to move it. It took us two attempts at playing to figure that out.

The game is a lot of fun even with the high price tag. However, clearer rules would have raised this review from a B+ to a golden A in playability. As it is, I can see folks getting frustrated on exactly how to use the fate and fortune cards in the bidding. So, if you don’t mind a little morbidity and interpretation, Bring Out Yer Dead is a great quick strategy game for a dark evening’s worth of fun.