When I was growing up, Saturday mornings meant Godzilla beating the snockers out of his newest enemy or Rodan squealing and diving towards Tokyo. The special effects sucked but we didn’t care. The creatures were cool and the plots were mindlessly action oriented.

Previous King Kong movies had more plot but still mostly mindless action. I’ve seen many renditions of the great ape story but was never that impressed with any of them. The movies, while starting out great, often became boring and predictable towards the end. I also never understood why giant apes liked blonde, silk-clad women as anything other than an appetizer to the main course of more people. 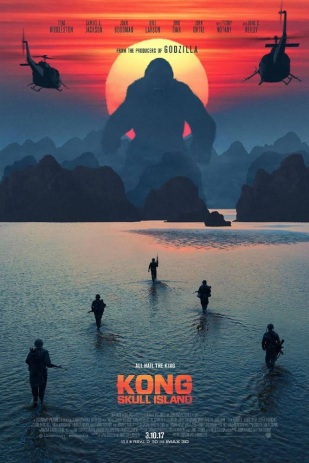 Kong Skull Island was certainly not boring. This creature feature is probably the best great ape rendition I’ve ever seen. Part of that is because the CGI is good enough now for Kong to look better than a man in a monkey suit. Secondly, the story makes more sense, particularly set in the 1970s. The movie starts with Bill Randa (played by John Goodman) wanting to prove monsters exist on this unexplored island. The hint he offers the government is a newspaper picture of a clawed-up transport ship, which looks suspiciously more like Godzilla-style damage. I’ve heard rumors that Kong Skull Island was a prequel to a Kong versus Godzilla movie and this may be a hint of that.

The early part of the movie is a little tedious with character introductions so we actually care about the people dying later. Yet the first sighting of Kong is impressively shadowed against the low sun. The action from that point continues at a great pace. People are still the bad guys in this film, which is also typical of Kong movies. This monster acts somewhat like a protector of his island and his people. Strangers, looking like the people he normally protects, fly in and starts bombing and shooting the place up. No wonder he attacks and kills so many in that first encounter.

Unfortunately, the subtlety of this thinking is lost on the two expedition leaders: military leader Preston Packard (played beautifully by Samuel L. Jackson)  and the survivor-turned-fake-scientist Randa. Both men are driven by internal demons. Instead of running away from a freakishly large ape killing a chunk of the party, these two guys push the group towards the danger, thus resulting in more deaths. Packard, certainly the more driven leader, is looking at the twilight of a military career during an unpopular war. He seeks revenge for his fallen men but he really wants a battle he can win. Played with Jackson’s perfected “don’t f*ck with me attitude”, he becomes locked in a personal battle with Kong that starts when they stare eye-to-eye at each other after the downing of all the choppers. One of the best scenes in the movie.

One of the changes is that the animal enemy in the film is not the big ape. As seen in the trailers, the real danger are the pale dinosaur-like critters that pop out of the ground and snatch folks. This creature looks and moves a lot like the creatures in Pitch Black and Cloverfield, making me wonder if the same artist designed them.

Those that nitpick will find dozens of faults with this movie. I certainly did. On one hand, the island is beautifully diverse. We see birds, deer, and house-sized water buffalo. However, we also see skyscraper-tall predators, tree-sized spiders, and hinted-at giant ants. The biologist in me shudders at these two groups because they’re not possible together. Giant predators would have cleared the limited ecosystem of smaller animals. Another glaring error was that two behemoths are fighting in the river and yet the boat does not sink, become swamped, or even washed away.

Looking beyond those errors, the movie is actually a good action romp and modernized version of the old classic. First of all, the Fay Wray of the film, Mason Weaver (played by lovely Brie Larson) is no damsel in distress and she is never offered up as a sacrifice or bride. In a nod to feminism, she is a tough war photographer brought along to document the journey. She does have two empathic moments with Kong but he never carries her away and she doesn’t need rescuing. In addition, no romantic link forms between her and the levelheaded jungle expert, James Conrad, played by handsome Tom Hiddleston. They stay together for most of the film but the audience senses only respect between them. In addition, no one tries to take the ape off the island. Kong never sacks New York or Hollywood. Plot-wise the idea of putting the beast on display has always struck me as idiotic even when I was a kid. It seems even more so now so I was delighted that the writers ditched the idea.

The movie’s end leaves plenty of opportunity for a sequel, which I will happily go see. The updating of this classic is darker and certainly more oriented to adults. You won’t be seeing this creature feature among Saturday morning cartoons but Kong Skull Island easily rules over the previous versions in terms action and plot intelligence. That alone makes it worth the price of a movie ticket and buying the film when it comes out.

One thought on “Kong Skull Island: A Modern Creature Feature”