This blog is the fourth installment in examining the changing meaning of story tropes in urban fantasy.

People have told ghost stories throughout human history. We like them because they often have a ring of truth. Whereas few put stock in campfire stories, such as The Hook, many people will gladly share their personal ghost experiences. We love the thrill of a safe scare since ghosts are less threatening than vampires or other monsters. In addition, we want to hear the gory details of how a person died a tragic death in order to become a spirit. It taps into the same morbid desire to check out car accidents as we drive by them.

Historically, ghost tales featured the specter as one of the center characters, terrifying because they are unseen, unpredictable, full of human foibles, and possibly evil. Modern day examples include The Others and The Woman in Black. Even in The Ghost and Mrs. Muir, the phantom entered into his condition by accidentally committing suicide and having a strong attachment to the house. Horror tales often involve a person dying tragically or a place that reeks of past evils such as an old insane asylum or prison. Many ghost hunter groups propagate this idea by finding high levels of spirit activity in abandoned hospitals and old prisons. The reality factor adds to the attraction of spook tales. After all, most large cities boast ghost tours or hunts but none have vampire or werewolf hunts.

In modern urban fantasy, spirits are often secondary characters, used to move the story along or reveal some needed plot line. The specters represent a tragic loss or an unfulfilled need, such as bringing about revenge or catching a murderer. One of the greatest examples of this is Shakespeare’s Hamlet, where an apparition of the Dane’s dad reveals his murderer.

Since ghosts are the afterlife embodiment of humans, modern tales about them have presented in two different ways. The first, which is most widely supported by cinema, is the horror story. Plots from movies such as The Amityville Horror, Paranormal Activity, or The Ring all point to a vicious, unhappy entity that attacks anyone crossing their path. Even the B movie types don’t portray the specters as normal-yet-dead individuals. The archetype character is made more frightening by the idea that, unlike vampires and werewolves, these monsters are unkillable. The best the hero can hope for is to escape the haunted place or somehow lay them to rest. These film-based spirits simply feed our enjoyment of being scared.

In urban fantasy literature, ghosts evolved from being distant entities to closer companions. In many stories, they still appear at the right moment to help with plot, such as in some of the Patricia Briggs Mercy Thompson books. Her books feature werewolves and a skinwalker while the ghosts help indicate the presence of a vampire. In other tales, such as some of Heather Graham’s romance books, they take on more of a companion or assistant role to the main character.

One significant change in the literature  is that the spirits are not apparitions, barely able to utter words. They are more or less people, with all the quirks, personalities, and emotions, but existing in a living-challenged state. As a result, writers should develop their ghost characters as fully as any other person and not simply add the specter for extra spice.

Clearly, ghosts represent mankind’s desire for our intellect or soul to go on after we cease to exist. No one wants to think that this short moment in the infinity of time is all that we will know or experience. A haunting offers the “proof” of life after the mortal existence, even if the specter has evil intentions. Hope also feeds into a modern concept of spirits. After all, we want to think about our loved ones continuing in some form and still watching over us.

The one factor that has changed in literature is the link to creating fear. It has either ramped up to extreme horror or been reduced to friendly or even silly proportions. In the fear-factor aspect, the spirits become almost demonic indications of obsession or vengeance. It goes along with the cautionary tale of “meddling where we don’t belong.” In that regard, the ghosts embody a single, uncomplicated viewpoint that is violent. The offered idea is that the good go on to their reward while the bad stay behind to suffer and torment others.

With more friendly ghosts, Casper being one of the first to introduce the idea, the concept of religion or moral choices is uncoupled from death. Good or bad does not enter into the conversation. The spirits are people doing what they might do if still living. They watch, protect, inform, or obsess. This change in portrayal reflects modern society’s movement away from strict interpretations of religion as a moral guide and the theory of the afterlife being controlled by a judgmental figurehead.

What We Can Do With the Restless Dead?

As a writer, you can flesh out your specters by letting your mind wander a bit on what the afterlife could be like. What creates a ghost and can you control it? How do they interact with the living and do we know when they are in the room with us? Certainly several theories are circulating from TV programs such as Ghost Hunters and other reality shows, which talk about energies, detection methods, and activities levels. Consider breaking the boundaries of the scary boo-ster  by offering a more defined monster or character. Beetlejuice examined the afterlife and modern spooks with hilarious results. One example from the movie was that the person’s death image was his or her final visage. Thus a lady sawed in half or the victim of head shrinkers provided a visually hilarious impact. The same actor, Michael Keaton, also headlined in a serious supernatural offering, White Noise, which dealt with ghostly voices coming through radio frequencies. The audience never saw the specters, allowing their minds to fill in all the horrible parts. These movies work well because they breathe new inspiration into this ancient story trope.

So if you are going to write about spirits, do some research first and then a lot of world building to create your vision of the afterlife and its constraints. After all, a ghost can also serve as a time traveler, introducing thoughts, manners, and actions out of place with today’s world. Like great sci-fi or fantasy works, you want to be consistent in your presentation of the story’s reality, particularly if it differs from the normal Judeo-Christian viewpoint. That way, you can create characters that radiate depth and personality, even if they are life challenged.

A fun side note, I went on a ghost hunt sponsored by Graves Paranormal and the Pikes Peak Writers’ Conference at the Colorado Springs Marriot. I took a lot of pictures because I’ve heard that you can capture evidence by photographing the same area multiple times and looking for anomalies. Imagine my surpise when this mist showed up on film. It was not visible to the naked eye and we could not reproduce the effect once I showed it to Mr. Graves. All of these pictures were taken in the same room. 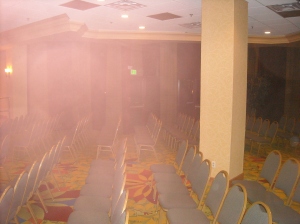 Mist appeared on film but not to the naked eye 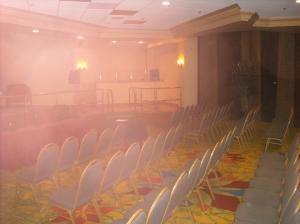 When the mist first appears. 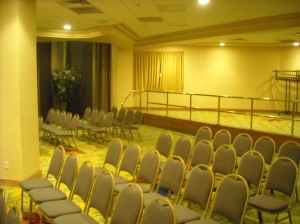 Mist disappeared. All photos taken within seconds of each other. 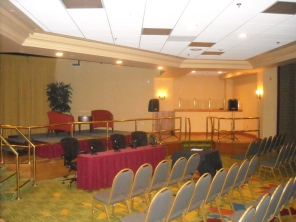